It is almost surreal to wake up early each morning to read that global interest rates have again moved lower. While the vast majority of economists have been predicting higher interest rates for the last four years, they just continue to fall. No econometric model seems to be able to predict the road we are on. Bond yields in early July, post Brexit, continued their march into deeper negative territory. Ten-year Japanese Government Bonds (JGBs) and ten-year German Bunds are now yielding -0.27% and -0.15%, respectively. With global investors desperately seeking income, the U.S. Treasury market has rallied, bringing the yield on the 30-year bond down to 2.1% while the yield on the 10-year note hit 1.31%, the lowest yields ever recorded in the history of the U.S. Treasury market. And the amount of government debt now trading with negative yields is staggering. Bianco research reports that $12.7 trillion, or 36% of all sovereign global debt yields less than zero as of June 30, 2016. Given the current global interest rate structure, absent accelerating economic growth and/or rising inflationary expectations, it appears U.S. interest rates will remain lower for longer. 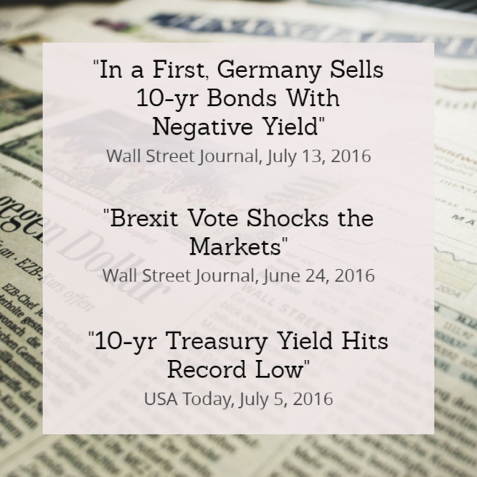 The epicenter of the fallout from the surprise Brexit vote may well be the European banking system. In the immediate aftermath of the vote many European bank stocks fell between 10% and 20%. And even when global equity markets bounced a few days after the vote, many of these same stocks did not recover. Deutsche Bank, headquartered in Germany and the largest bank in continental Europe, has been under immense pressure. In early July, it was trading below the post-crash Lehman lows and within earshot of a single digit stock price. The Italian banking system, plagued with hundreds of billions in non-performing loans, also came under great duress. In response, the Italian government sought a $40-plus billion injection from the European Central Bank into the Italian banking system in an attempt to stabilize the situation. This request initially received a rather cold response from the Germans, to which Italian Prime Minister, Matteo Renzi, issued the following statement at a press conference:

Prime Minster Renzi was clearly calling out the Germans and Deutsche Bank in these comments as Deutsche Bank has by some accounts close to $75 trillion in derivatives exposure, more than 20 times the size of Germany’s gross domestic product. And this conflict amongst members of the European Union brings to light the greatest fear from the Brexit result, namely, a shattering of the Union. The more the Spanish, Italians, French, etc. feel constrained in their national affairs by the Germans and/or the EU in Brussels, the more the far-right political parties gain in influence. It is these parties which are pushing for referendums, like the British just held, as an avenue to encourage their citizens to vote to leave the EU. The next few years will be quite historic for Europe. The United Kingdom will need to invoke article 50 of the Treaty of Lisbon to formally begin the process to exit the EU.  This, along with ongoing political developments in Europe, have the potential to send another shockwave through the financial markets. That and the ongoing developments in China, which bear watching and will be the subject of a future blog post.

There are always many things to be worried about as an investor. That being said, it does feel like we are at a historic place in time. Over one-third of all sovereign global debt is trading at negative yields, global debt burdens continue to grow, especially in China and Japan, one of the world’s largest trading blocks, the EU, is possibly facing an existential threat over the next few years, and there is growing distrust of many institutions, which were formerly considered credible, by the citizens of many nations. With this backdrop, we expect central banks to remain very aggressive in their efforts to stimulate economic growth and backstop banking systems. Therefore expect the easy money policies of the last 7 years to continue, if not accelerate (see blog post on helicopter money). In such an environment, we believe maintaining a broadly diversified portfolio of quality companies generating excess free cash flow, U.S. centric bonds, real estate investment trusts, precious metals and some cash for optionality, positions an investor with the best probability for success. And that is what we intend to do while staying always on the lookout for new opportunities and risks to our positions.

As always, we appreciate the trust you place in us and remain committed to helping you achieve your financial objectives. 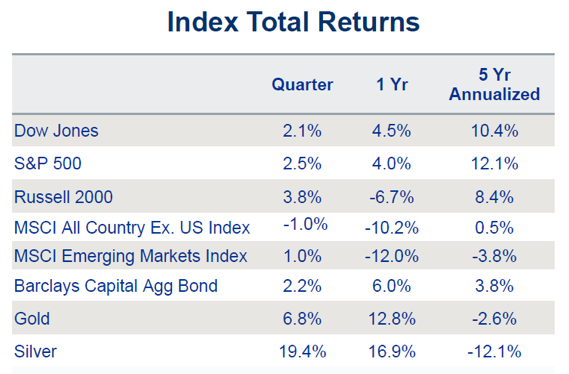 The information contained in this commentary has been provided by PYA Waltman Capital, LLC for general information purposes only and has been obtained from sources believed to be reliable, but is not guaranteed. The information shall not constitute investment advice or an offer or recommendation to buy or sell any security, commodity or services. The products and services described in this commentary may not be available to, or suitable for, all investors. Past performance does not guarantee future results. Market conditions can vary widely over time and can result in a loss of portfolio value.