A LOT OF CHURN - LITTLE PROGRESS

What a wild ride it has been. The Standard and Poor’s 500 Index, after suffering the worst ever start to a year, reversed in March and closed the first quarter with a small gain. The Nasdaq composite also had a nice rally in March but closed the quarter in negative territory, down approximately 4%. There were many reasons cited for the weak start in 2016 including global growth concerns, weakness in European banks, and ongoing geopolitical risks. As has been the case repeatedly over the past six years, when central banks became concerned about lagging growth and falling asset prices, they responded. Japan surprised the market in early January by adopting a Negative Interest Rate Policy (NIRP), charging member banks for holding reserve deposits. In March, the market was expecting the European Central Bank (ECB) President, Mario Draghi, to deliver more goodies to the market. He didn’t disappoint. The ECB pushed interest rates further into negative territory and increased its bond buying program by 20 billion Euros to 80 billion a month and announced it would also be buying, for the first time, corporate bonds along with government bonds. Finally, in late March, Janet Yellen, Chair of the U.S. Federal Reserve (Fed), gave a speech at the Economic Club of New York, emphasizing to the audience that it was appropriate to “proceed cautiously,” and that “caution is especially warranted” with regard to future interest rate hikes.

While correlation is not causation, the combined effects of more monetary stimulus and continued dovish comments from the Fed resulted in a six week rally in U.S. stocks to end the first quarter. Market participants now clearly have a Pavlovian response to economic and stock market weakness. Weakness leads to central bank action which then arrests any downturn which leads to rising stock prices. In the simplest terms, buy the dip because the Fed has your back. Or as one trader put it, “Listen to Yellen, ignore fundamentals.”

As central banks push down further on the accelerator in an attempt to promote growth, the boundaries of monetary policy are being stretched. There is now $7 trillion in government bonds that trade with a negative interest rate. Investors are now willing to PAY governments for the privilege of LOANING THEM money. A strange world indeed. We have no doubt that central banks will continue in their efforts, to use Mr. Draghi’s words, doing “whatever it takes” to keep things moving forward. This does not mean, however, that risk is to be ignored. Rather, it means executing a time-tested strategy of building a diversified portfolio composed of different asset classes. It means buying great businesses at a fair price and not ignoring the fundamentals. It means having some assets in the portfolio that are negatively correlated (move in the opposite direction) to stocks. These are the things we remain focused on as they are things we can control and where we can add the most value over time.

As you may have seen, we recently launched an updated version of our website. One of the primary reasons for doing so was to better communicate with our clients. If you haven’t already done so, we strongly encourage you to sign-up on our website to receive ongoing updates and blog posts. PYAW team members will be writing regular blog posts on various financial planning (retirement and education planning, estate planning, social security, Medicare, etc.) and investment topics. We also encourage you to follow us on Facebook, Twitter and LinkedIn as we will be sharing content on these sites as well. We hope you find this more interactive website useful and we welcome any feedback or comments you may have.

As always, we remain committed to helping you achieve your financial objectives. 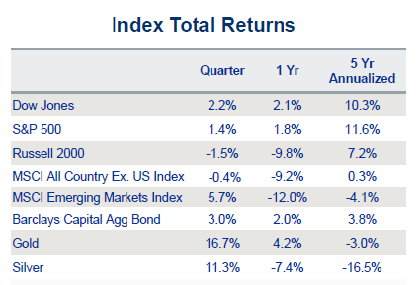