So read three headlines as 2015 drew to a close. The Bloomberg News story goes on to point out that “the idea behind asset allocation is simple; when one market struggles, it’s OK because an investor can jump into another that is thriving. Not so in 2015.” In fact, it was the worst year for asset allocation funds since 1937. And as the year progressed, the leadership of the U.S. stock market continued to narrow to just a handful of companies, earning them the acronym FANG (better known as Facebook, Amazon, Netflix, and Google). As can be seen from the table below, while these companies may be very well-run, they are not cheap as measured by price-to-earnings (p/e) ratios. For context, the average historical p/e ratio of the S&P 500 is about 15.5.

Without the contribution of these four companies, the S&P 500 was down approximately 4% on the year. Further, the NYSE Composite Index, which is comprised of approximately 2,500 companies, was down 6% on the year. Even Berkshire Hathaway, run by one of the best capital allocators in the world, declined 12%. And the pain was more acute in commodities such as oil, natural gas, copper and iron ore. Foreign and emerging markets provided no lift either, with international stocks down 6% and emerging market stocks down 15%. Bottom line, the more diversified you were, the worse you did in 2015. Owning bonds didn’t help much either as the index for investment grade U.S. bonds returned less than 1%, and junk bonds had their worst year since the Financial Crisis. This led a number of very well-respected hedge funds to significantly underperform, in some cases falling in excess of 20%.

In spite of a strengthening U.S. dollar, commodity collapse, carnage in the junk bond market and tepid economic growth, the Federal Reserve decided finally to increase short-term interest rates by 0.25%. While this small move in and of itself is not meaningful in absolute terms, it risks further tightening of credit conditions and slowing global growth. It is interesting to note that the current economic conditions under which the Fed decided to raise rates also existed in 2011 when it began Operation Twist in order to stimulate the economy. In addition, the Fed is forecasting it will raise short-term interest rates by another 1% in 2016, likely meaning four rate hikes of a quarter point. The coming year will reveal whether the Fed made a policy mistake increasing rates in such conditions and if the U.S. and global economy can withstand further increases as the Fed currently projects. We suspect the Fed will not be raising rates four times in 2016, if at all.

As we enter 2016, the U.S. stock market remains very expensive by numerous historical metrics. In addition, the mantra that the Fed “has your back” has begun to change, as it just increased interest rates and is projecting more to come. We expect volatility to increase within and amongst asset classes in 2016 as global monetary policy is no longer coordinated (U.S. tightening, Europe and Japan easing). Given our concerns about elevated valuations and the potential for downside pressure, we have consciously chosen to underweight our portfolios to stocks. This does not mean we are planted in this posture. We are always searching for quality companies to own at a reasonable price. One of the benefits of the general stock market weakness in 2015 was that some blue-chip, industry-leading companies fell out of favor and their stock prices declined, putting them on sale. We have purchased a few of these dominant businesses in 2015 and will continue to do so in 2016 as opportunities arise. Our discipline precludes us from buying momentum stocks that we hope we can sell at a higher price to another speculator. While this may cause us to lag in a momentum-fueled, speculative market, we are confident it will prove prudent over the long-term. As always, we remain committed to helping you achieve your financial goals.

“After A Tumultuous 2015, Investors Have Low Expectations for Markets” - Wall Street Journal, January 1, 2016 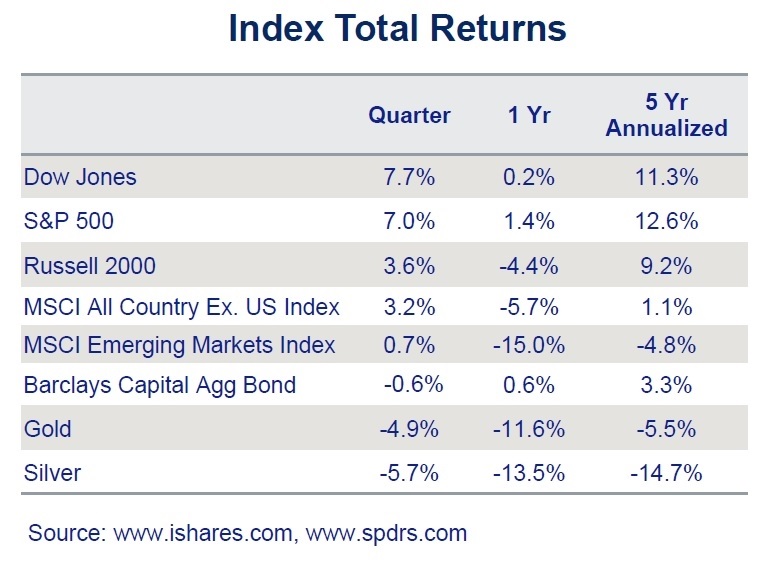