If this is the first time you’ve read one of these, you can find the previous issues here (issue #1, issue #2, issue #3,issue #4).  So far, we’ve covered some of the basics of Bitcoin – what is cryptography, how does it work, who might use it, etc.   This issue will delve into possible reasons for the meteoric rise in Bitcoin prices.  Since writing about Bitcoin, the price has risen from $770 in December 2016 to approximately $50,000 in December 2021. 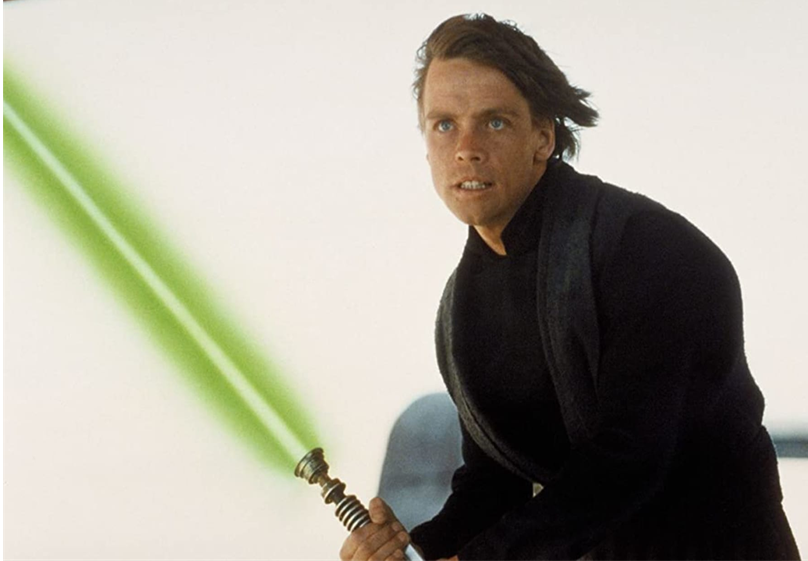 In 1977 the world was introduced to a character named Luke Skywalker.  The original Star Wars movies coincided with my childhood years and thus have been a part of my life ever since.  I collected Star Wars figurines and had a Millennium Falcon and the plastic Death Star, and routinely crushed Luke, Han Solo, and Princess Leia in the trash compactor filled with foam garbage.   Looking back, I probably enjoyed it too much.  I took my figurines to the sand box in my back yard and unfortunately learned that sand would make their heads pop off due to added pressure in the neck joint.  My dad pioneered figurine neck fusion surgery by drilling a screw into the body and gluing their heads back on.  Star Wars was one of the first examples of rebellion that I can recall.  As you likely know, Darth Vader and the Galactic Empire sought to oppress the galaxy with their evil plans.  Their only opposition was a group of renegades known as the Rebel Alliance, ultimately led by Luke Skywalker.

The 10-Year Project has been a public learning experience centered around Bitcoin.   In the first issue I wrote, “I have absolutely no idea if this project’s topic of interest will even exist in 10 years.  Nor do I know if the idea will revolutionize the world of finance.”  Almost five years later, I am compelled to change my tune.  I think a rebellion is underway.

In talking about Bitcoin prior to this year, I felt as if clients looked at me like I had taken illicit drugs prior to meeting with them.  This year I’ve noticed a change.  Curiosity is up.  Rising prices tend to fuel curiosity.  For perspective, Bitcoin is now a top 5 global currency.  The chart below from Deutsche Bank ranks the largest global currencies by size.  You’ll notice the Chinese yuan is missing from the chart, as we lack a clear picture of the amount in circulation due to less than straightforward data from the Chinese government.  Most everyone would place the yuan in the top 3 of global currencies, which would push Bitcoin back to the fourth or fifth spot, depending on the day.  That is pretty amazing over the course of 12 years.   The adoption of Bitcoin continues. 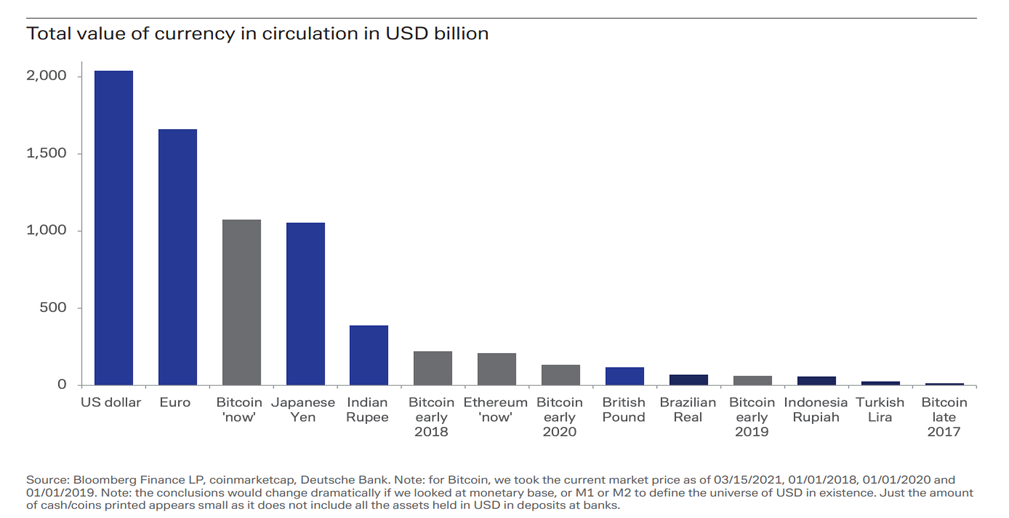 Rebellions begin with a loss of trust and confidence in leadership.  As I’ve pondered this recently, it struck me that maybe part of the reason that Bitcoin has risen from zero to a top 5 currency is related to this loss in confidence.   I see two obvious culprits behind a loss in confidence.  First, let’s look at the approval rating of Congress over the past 46 years. 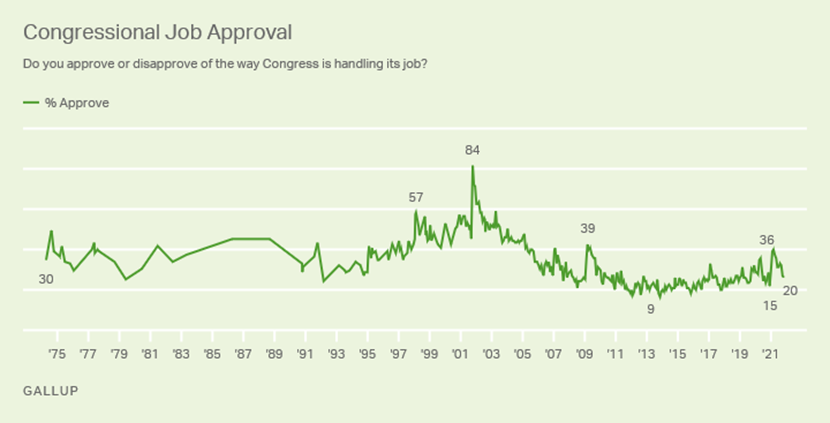 Currently, 20% of Americans polled by Gallup give Congress a satisfactory rating.  While that seems like a shockingly low approval rate, the graph above also tells us that Americans often disapprove of our elected officials.  We can see that approval ratings peaked around 2002 at 84% under George W. Bush.  It’s been a somewhat sad state of affairs since from an approval rating standpoint.   I doubt that neither the Great Recession of 2008 nor social media have helped approval ratings for elected officials.   I think part of Bitcoin’s success can be tied to distrust and frustration in government, but I think there is a significantly more important factor at work.

Much has been written about the current fiscal affairs of the United States.  Up until the early 1970’s the US dollar was pegged to gold.  New issuances of debt were limited by how much gold was owned by the United States.  The gold standard probably needed to go away, as the US economy was set to grow far faster than we could stash away gold bars in Fort Knox.  But the limiting factor of having spending curtailed by something was a form of protection in the fiscal health of the country.  It’s difficult to believe that outstanding US debt stood at $5.7 trillion at the turn of the century.  You can find similar charts for many countries around the world over this timeframe.  I think this has a lot to do with the birth and current price of Bitcoin.  As seen on the following page, US debt is in exponential growth mode.  Currencies are under attack. 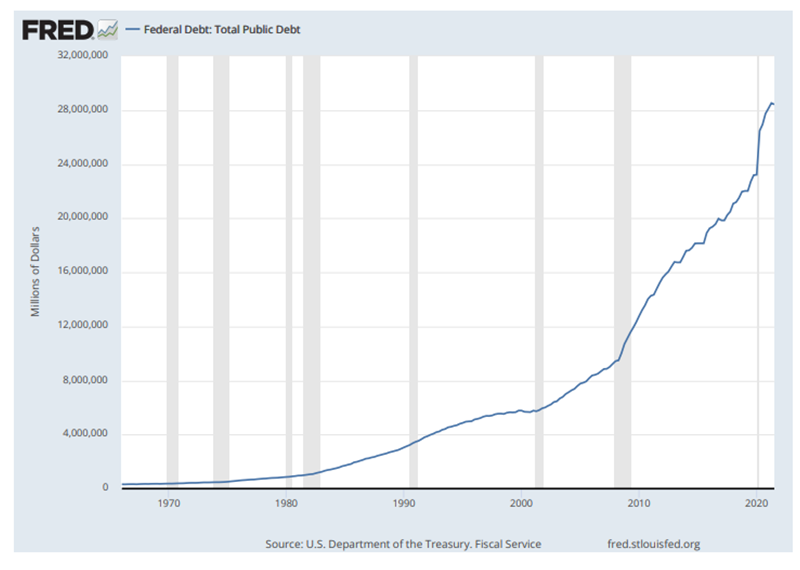 If the price of Bitcoin is correlated with a lack of confidence in leadership and a rapidly growing debt load, what does that tell us about the future?  In my opinion, it points to higher and possibly much higher prices over time.   There will no doubt be crippling periods of volatility in the price of Bitcoin.  Pundits will rise and proclaim its death as they have many times over the past decade.  Buyer beware.   But unless you believe that our elected officials will refocus their efforts around fiscal prudence or find a way to massively grow the US economy, I believe our debt load will continue to soar over the coming decade.  The same will likely be true around much of the developed world.

Dollars have a long life ahead of them for sure.   This isn’t a prediction of an imminent currency crisis.  It may just be a time where technology and problem solving come together to offer the world an alternative to the monopoly of centralized currencies.  We have grown somewhat immune to the power of governments around the world that can digitally create Dollars, Euros, and Yen out of thin air to fund spending programs and run massive budget deficits.  The proliferation of Bitcoin and other cryptocurrencies tells a story of adoption.  Adoption curves steepen when something useful gets discovered by the masses.  That day may never come for Bitcoin, or it may lie ahead of us over the coming decade.

As American author John Updike said, “Revolution is just one crowd taking power from another.”  There is a gradual transfer of power underway.  The old financial complex will resist, and governments will come with new regulations.  But these are not the worry of the rebels.  Just as Luke and his rebel army fought against the mighty Galactic Empire in a galaxy far, far away, today the technologists wage war with mainstream currencies.  Its shaping up to be an epic battle, or should we say a rebellion?

PYA Waltman Capital, LLC (“PYAW”) is an investment adviser registered with the U.S. Securities and Exchange Commission. Registration does not imply a certain level of skill or training. More information about PYAW’s investment advisory services can be found in its Form ADV Part 2, which is available upon request. PYA-21-37